The Band "Corduroy Jim" Has A New Album Called "Cinco"

Written by Andrew Tuckman on 29 November 2012. Posted in Reviews 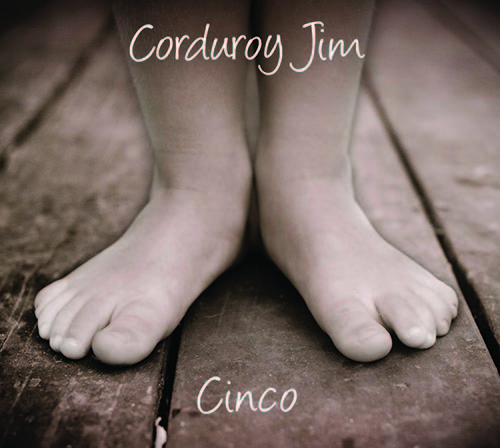 Pack your bags, plan a road trip, set out on the open road and put Cinco in the car stereo. Be prepared to listen to this EP over and over again as the beat keeps time and the miles go screaming by.

If you are yearning for a hard hitting, inspirational and upbeat sound then look no further. Cinco has all that and more.  It is reminiscent of early '90s jam-band with influences ranging from Strangefolk, Ekoostic Hookah and Pearl Jam to Phish and God Street Wine.  Recorded at Suspect Studios in San Jose California, this EP compilation is a well-mastered production from start to finish.

The band Cordouroy Jim isn't new to the San Francisco Bay area music scene.  The guys have been at it almost 15 years now and their latest resurgence is proof that this band hasn't given up playing shows, recording great music and creating their art for the community to embrace.

On acoustic guitar, vocals and harmonica is Marty Rodriguez who sings like Elvis Costello & Lyle Lovett and wants nothing more than attention for his hard work and happiness for his fans. Listen to track two, Home and you'll feel comforted with the soothing sounds of Rodgriquez's voice, a song he wrote.  We also get to hear Rodriguez on the song, Thief-The Ballad of Johnny Cat which is another gem on the EP.

Playing drums and the backbone of the band is Michael Paladino who did everything right on this album.  Notice his rolls and accents in every song, they are flawless and well executed.

Singing and playing electric guitar is Richard "Richie" Thomas who is not only schooled in recording and producing, but also can shred with his instrument. His phrasing flows well and is easy to follow along with. Thomas' song Little Child (in the time signature 3/3) is an anthem at the least with elements of "Prog- Rock" littered all over it.  This one deserves to be performed in a large arena with huge speakers and a full lighting rig.

On keyboards and vocals is Nick Chargin who has been playing music since the age of five, starting out on piano and later picking up guitar in his teens. His style can best be compared to Rob Barraco from The ZenTricksters & Dark Star Orchestra with that bouncy, driving piano and powerful, soulful vocals.  Listen to the first track The Purple Light, Chargin's range is enormous and shows us his voice as a full-fledged instrument in the mix.

Holding down the bass section is Steve "Bear" Strom who is consistently in the pocket and an integral part of the rhythm section. Besides playing with the guys in Corduroy Jim, Steve’s other bands include The Silicon Valley Houserockers, Latin Funk Express, Monkey Knife Fight V, Severe Pleasure, and at times he gets to sit in with the Blind Pilots. Strom's song Below puts a smile on my face every time and takes me back to 1992 when jam-music was beginning to take shape.  That time period has an innocence and creative expression to it and one that will always have a place in my heart.

Corduroy Jim also had the luxury of having Jacob Knight playing Tablas on "Little Child"  as well as Raymond St. Martin on percussion & Juno Programming who definitely knows how to fill in the gaps perfectly.

Everyone on the album is a skilled musician and works well together in the studio and onstage.  According to Marty Rodriguez, "This record is much more of a 'band' production than the first two records, Hanger & In The Desert Of Devotion, respectfully.  This one, 'Cinco' is an EP as opposed to a full-length record. We decided to record our best material at the time and it ended up being the five songs you hear now instead of forcing the issue just to make an 'album'. This was a good decision for us for many reasons, especially considering the time that it takes to complete a project since we do all of our own production once we leave a studio to record rhythm tracks. We recorded the basic tracks in San Jose this time at Suspect Studios using Pro Tools and going digital. The first two records were recorded in Sacramento at Joe's Style Shop and The Hanger using 8 & 16 track analog tape so there is a very big departure in how this record sounds, especially since our drummer Michael was in an isolation booth with his kit this time around".

Cinco was produced by Judy Kirschner and Andre Zweers of Screaming Lizard Productions in Petaluma, CA and from what I heard from Rodriguez, "they're a fantastic team and amazing people to work with, and they also have worked with some pretty big names in the industry including Santana, Sammy Hagar, Bad Brains, Bob Dylan, Ruben Blades, Earth, Wind, & Fire, Metallica, & Bootsy Collins to name a few. Not to mention they both have worked at Sky Walker Sound for years and have a Grammy nomination tucked away so they carry a very incomparable reputation with them. Big props go out to both of them!"

Corduroy Jim isn't calling it quits and hasn't even started to boast that question.  For now, the guys are mustering up the strength that's needed to endure in music business. "Corduroy Jim is stronger than it ever has been, not just from a talent standpoint, but from a "chemistry' and sense of 'trust' amongst the guys" Rodriguez told me. "We really genuinely love and like each other, but more importantly, the respect that we have for one another as musicians is so critical. That doesn't always happen and we realize how lucky we are to have such amazing chemistry in this band."

Corduroy Jim is very lucky.  Built within each song and lying throughout the entire compilation is a positive energy that wants to be heard by as many people as possible. Cinco touches on multiple styles of music including Jazz, Psychedelic, Jam and Rock.  But, in essence, that's the beauty of Jam-Band - you never know what you are going to get.  For this one, you get a work of art and one that Corduroy Jim can be proud of.  Congratulations to this band!

For more of Corduroy Jim and to hear their new CD, check out: http://www.corduroyjim.com/fr_home.cfm