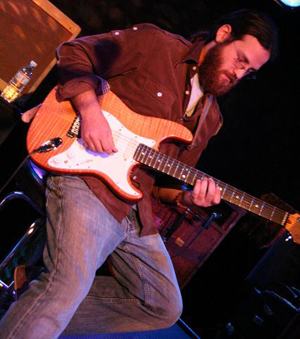 On the spot trio is one of those bands that is doing everything right:  touring hard, recording albums, playing high energy shows and climbing the ladder of success one wrung at a time.

Danny Mayer is very content with his place in the world, his ability as a musician and the busy life he leads. Like a lot of guitarists out there he’s striving for the recognition on a national level that only some in the music business receive. Most spend lifetimes trying to get to that point where a musician can say “I just played to three thousand people and it felt great”. With that success comes articles and write ups about the band, heavy tour schedules, photo’s on the web and a loyal fan base that comes out for every show.

In a town like Santa Cruz though, local touring bands get the short end of the stick even on their home turf. Other acts who have been playing for years have the upper hand in this town and most of the crowds like to see names they know. For OTS, this makes it hard to develop a fan base, get compensated for their hard work and play two to three nights a week all the time. The only other alternative is to tour relentlessly which is what OTS has done the last two years.

Accompanying Danny Mayer in On The Spot is Jeff Wilson on drums and Kris Yunker on Organ and keys. The three members have that unique chemistry onstage that works well and limits conflict. It is no mystery that all of the guys up there are having fun, learning from their mistakes, growing individually and reacting to the crowd every step of the way. The music is high energy, all instrumental and hammond organ driven, that encompasses, funk, rock, Jam, Jazz, and Soul.

On a random Tuesday in July I caught up with Danny at The Crepe Place in Santa Cruz while he was playing with 7 Come 11, another organ trio that Mayer is now a member of. This is one of the quieter nights that a local band can get a steady job playing every week when most people are not coming out to see music. Danny and I have known each other for many years so getting a few minutes wasn’t difficult. We spoke in the back room before his show about what it’s like to be in a new band and the hard work it takes to get noticed.

For those who don’t know about your band, tell us what OTS is? What is the sound, what’s the theory?

We have Chris on Hammand Organ with Clav and midi bass, that’s the whole trip; it sounds like Jaco Pastorius onstage but it’s really Chris’ left hand. Emery Nelson is on Drums and he kills it . The vision is to be funky, that’s our biggest thing these days to try to take it away from more of the noodley jamband sound into a more hard kind of psychedelic funk and it has really been working.

Where has the band been the last six months, I’ve seen an impressive tour schedule. What’s cities have been fun for you?

Our first tour we did the whole pacific northwest thing, Bellingham Washington just went off. I don’t know why or how but it was a turning point for us. We have also been hitting up Colorado, Wyoming and Utah doing that little loop. Some of the little mountain towns in Colorado like Breckinridge and Edwards keep asking us back. But mostly Denver and Boulder just clearly have been unbelievable with serious turnout with all the right kind of people. We’ve been fortunate to have Joey Porter from the Motet sit in with us and he brings a little crew. It’s been pretty awesome.

How is life on the road, is it easy?

Fortunately we are a trio and it’s really easy; we all have these drastically different personalities and we all just get along so well. There might be a few tense moments that resolve really fast but it is the best. I book all the tours and set it up and play 16 show in a row and have one night off. This last one was a little shorter we played 9 shows with one night off. Night after night just hitting every time where it gets to a point where you can close your eyes and depend on these two guys because it takes a lot of the unpredictability out of it. You can be relaxed and get a lot more confident and in turn not have to say as much musically and just let things unfold rather than just force something to happen.

One of my questions I have been asking a lot of the musicians is what is it like for you to step onstage when you are setting up gear and getting ready to play. Talk about the juxtaposition between life off the stage and life as soon as you step onstage?

Yes it’s very special, even if there are five people there. Setting up depending on circumstances can be stressful at times though if something doesn’t work, especially if you are in some random town. You gotta figure that out. But if there are no technical difficulties it’s all pretty enjoyable. There really is a different vibe setting up, but going places out of town where they don’t know who we are and they treat us like just the band and by the second set they are saying “What the hell can we get you, your band is amazing” there is a whole difference in attitude in the whole place. Then it’s really great. But the second I start playing, I could be sick, pissed off or nervous I could have all these other issues going on in life but once the music starts it’s all gone and that is cool.

You guys just released “Straight out of the Garden”?

We recorded it in December and it came out in March so a few months ago.

Judging from your photo’s and your blogs it seemed like an amazing process? I wonder if you can elaborate on how it came together and how smooth was it?

Yeah, it was smooth by working with Al Evans from Soullive. We met him and he had cheaper rates than someone here in Santa Cruz and at the same time we got to work with one of our idols. We arrived there and we were a little nervous cause we only met him a couple of times but as soon as we started recording and saw that he actually was digging the music, everything got easy and honestly flowed so well. We were in there twelve hours a day, did a song a day mixed, done by the end of the day and ten days later had an album. It was shockingly easy, he never changed anyting we did. If I had an idea, he was saying I am hearing the same thing. If he had an idea all three of us were saying we are too. It was amazing.

What are your plans the rest of the summer and into the fall?

We’re just promoting the album, taking it month to month and saving up for a tour van. The one we have we’ve been borrowing from a friend and it’s not feeling good anymore. With OTS, we just do better on the road. We don’t have much of a draw in Santa Cruz we have a bunch of bay area shows and then back at Moe’s Alley. Other than that I don’t have anything planned or lined up, I am waiting to see what happens and then getting out there.

What else keeps you busy here in town?

I feel blessed because of 7 Come 11 who have a strong local following and I get to play every week with them. Sometimes twice a week for the past two months which has helped me with OTS, there isn’t that urgency or frustration with people not knowing about OTS. A lot of local people get to see me thru this. But it definitely was frustrating for a little while because I feel we were doing more than any other band out there locally in town we were like putting it out into the world and doing great shit. If I saw a write up of a band who worked with someone from Soulive I would be like who the hell are these guys. We have had this amazing luck with real idols of ours sitting in with us all over the place. To me the missing link is something what you are trying to do with Jambandfriendly.com; some third party saying look at this. Because I promote as much as I can and I don’t personally like to say “come see my band, come see my band” over and over again.

I say you guys have an amazing thing going. Your fit with 7 come 11 is a a great pairing and it feels like OTS has some kind of momentum. Once you have that momentum it really feels good. I guess my last question is what will be enough for you. When will you be really happy?

I am pretty happy and pretty busy with both bands. Between that and family life I feel like there isn’t much more personally that I can do. But I will be really happy when OTS is playing bigger shows and where there are a couple of hundred people in the audience consistently and we have some draw wherever we are going. We’re right at the in between point now where musically we are getting better; if we don’t play for a month the next time we get together we are somehow magically better than when we last played. We have this thing that is unexplainable. I am hoping and praying for a little more recognition. But I am not unsatisfied. I am not looking for the next best thing. In time we will get what we deserve.

The jamband community needs to hear more from On The Spot I’d say. Jambandfriendly.com supports OTS and 7 come 11. We wish you luck in the coming year. It’s all about community, thanks for your time Danny Mayer.

For more of OTS visit: www.otstrio.com